I started the evening of June 19th in the garage looking over the coamings. Prior to arrivng on the Island I had researched how other people had repaired cracked and split coamings. I of course wasn’t entirely sure which way would work until I had seen them in person. Since I knew that the coamings were salvageable based on photographs I had seen, it was just a decision on what repair would work best based on the length of the crack and whether or not it was split all the way through.

I had found that it was not split all the way through except at about 8 inches at the aft end of the coaming.

Basically there were two ways to repair the crack in the Port coaming.

I could cut out the coaming as seen in the photo below and place a new mahogany piece back in with gorilla glue. Or I could just sand the crack and clean it out throughly and gorilla glue it together. The first choice would give the repair more strength. However I would probably need to do this fix in a least two places due to the length of the crack. 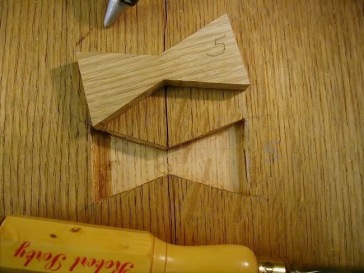 After some thought I decided the second choice was the best. As it didn’t destroy or greatly modify the original coaming. Additionally if the repair didn’t hold up I could always go back to the first choice. 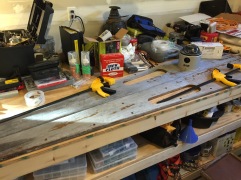 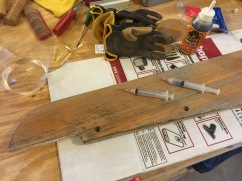 Where is my steak?

Sanding the Coamings and Cockpit Table

After dinner I then sanded down the starboard side coaming and also sanded down the cockpit table in preparation for varnish. I then shutdown for the evening as I would give the gorilla glue 24 hours to do its job, and I would be up early to varnish the starboard coaming and cockpit table in the morning. My goal was to get the Coamings and Cockpit table varnished and installed, and the cabin, deck and boat pressure washed and cleaned prior to the wife seeing the boat. I only had one more day before I picked her up so I had a lot to do. 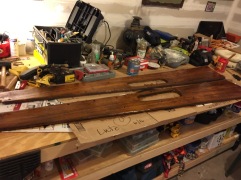 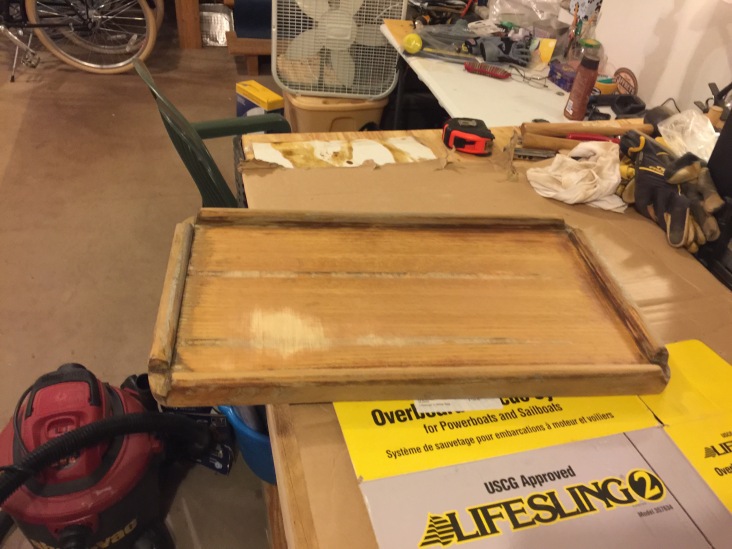 a little too overzealous with the sanding

I was up again about 4:00 a.m. and was out in the garage by 5:00 a.m applying the first coat of varnish to the cockpit table and the starboard coaming. I then packed up the jeep with a couple of buckets and the pressure washer. I then headed down to the slip about 8:00 a.m.

Since it was still rather early and a slight rain was falling. I spent the time going through the boat cabin and its abundant storage areas  and throwing out trash and and also making a pile of items that I thought the previous owner may wish to keep. I wiped down the bilge areas and the engine compartment with soap and water and removed most of the accumulated grime. By then it was 11:00 a.m and I fired up the the pressure washer and washed the deck and the teak down. Wow was the teak weathered and black. But once I pressure washed it it looked great. It sure needs some sanding and varnish but it was doubtful that we would have time this year. 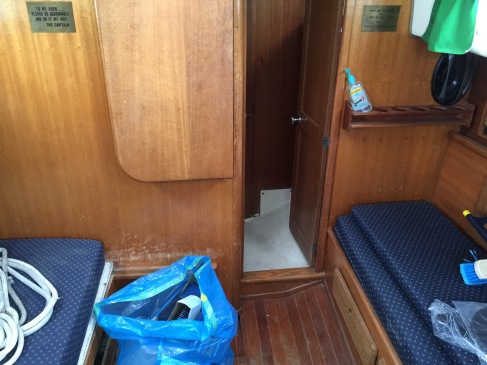 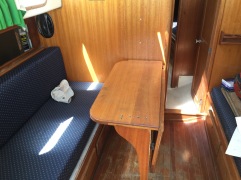 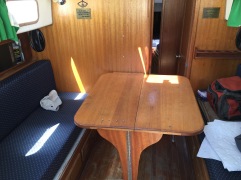 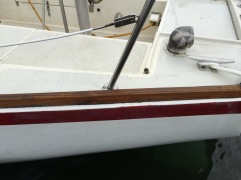 At the boat I Installed the life sling 2, emergency ladder, compass and grill. 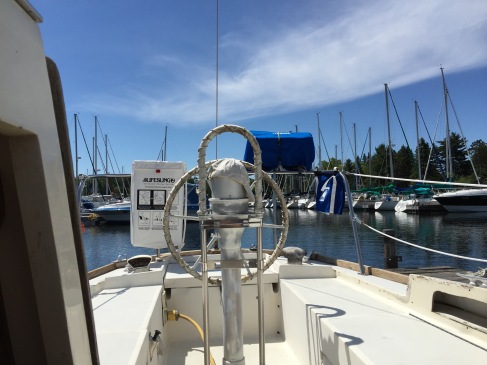 view from the cabin

Back at the house later that evening I gave the port coaming a final coat of varnish and called it good. I knew that in 2016 I may have to sand and give them another coat or two but it was good enough for now. Mounting the coamings and the winches would have to wait a day or two.

The next day’s agenda was to drive to Eau Claire, WI to pick up the wife, a 6 hour roundtrip.