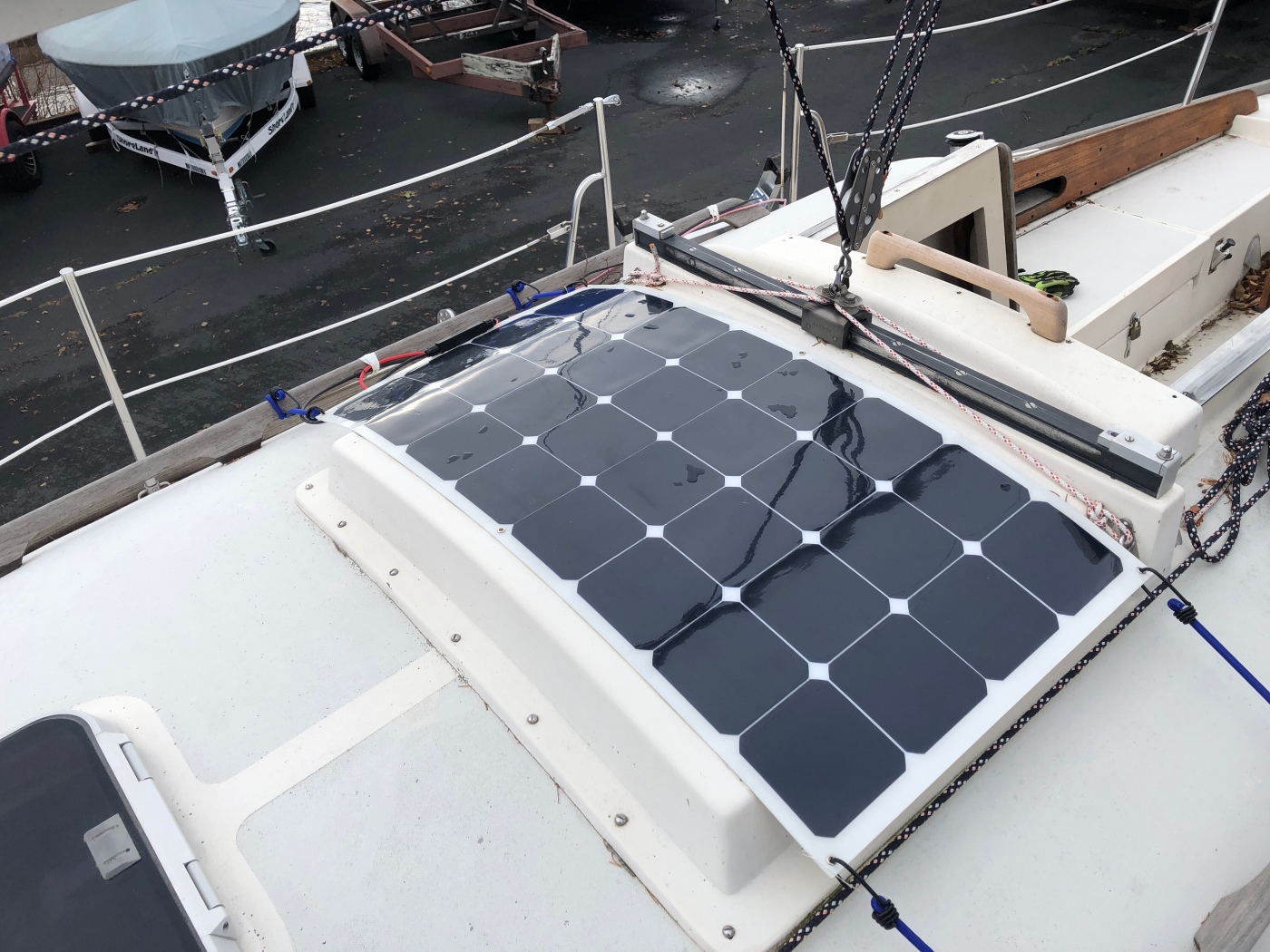 So with the  new Airhead now installed, it was now time to install a solar panel and controller to solve two problems.

In the spring I had purchased a 100 watt semi flexible Windy Nation solar panel and a Go Power 30 amp charge controller of off Amazon for $300. With extra wire and deck hardware it came to $375.

1. Mount a rigid panel on the stern rail. Though this option appealed to me initially, most of the panels that were the right size were in the 30 watt range and quite expensive for their small size.

2. Mount a semi-flexible panel on the deck. This option seemed to me to be the best as I get get a higher wattage panel for way less then option 1 and it gave me the flexibility (no pun intended) of multiple mounting scenarios.  I could screw it or glue it to the deck. Velcro was also an option.

So I went with option number 2. You just couldn’t beat the price and much more bang for the buck when it came to wattage and mounting options. Of course there are some drawbacks of mounting a solar panel on the deck or on a dodger or Bimini, namely shading from the sails. However with a 100 watt panel I still should receive enough power when sailing for this not to be a problem.

Where to mount. And a temporary solution.

After receiving the panel, it was a little larger than anticipated compared to where I wanted to mount the panel on the foredeck. So after several test fits and a thoughtful look at how to penetrate the cabin with the wires, I decided to bungee the panel to the companionway hatch roof ahead of the traveler and run the wires through the old speed  instrument hole that I previously had plugged with starboard.  This was a temporary solution as I anticipate placing the panel on top of the dodger or Bimini with either Velcro, or snaps and then running the wires into the cabin electrical panel in a different location.

The installation of the charge controller.

Again I carefully thought this out and definitely measured twice and cut once.

I installed the controller directly above the existing dc distribution panel.

The wiring was easy, and before long the sun was generating power and charging our batteries!

When we went up to the Island for Thanksgiving I checked the charge on our batteries and we were at 13.2 volts on both. Basically fully charged batteries.

Now there is no need to have the old girl shrink wrapped, nor worry about flooding when on the hard ever again! Yeah Baby! Power On!